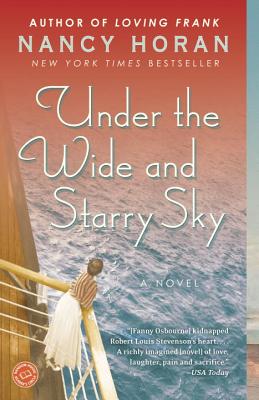 Historical fiction has been a favorite genre of mine since I was in elementary school before I understood the rich history these stories were rooted in. Whether it was the 1940s or a turn-of-the-century heroine, the disparity in time always eluded me because I was more captivated by the characters. Under the Wide and Starry Sky by Nancy Horan is a prime example.

Under the Wide and Starry Sky is about the love affair of Robert Louis Stevenson and his wife Fanny Van de Grift Osbourne. It tells their story over a period of eighteen years including their travels across the globe from Paris to Samoa. The story follows Stevenson’s rise as a writer from his travel writing to the publication of The Strange Case of Dr. Jeckyll and Mr. Hyde, as well as numerous South Seas works.

The thing I liked about the love story between Fanny and Robert was that they were both creatives. When we first meet Fanny, she’s just disembarked from a boat after finding out her husband Sam was having an affair. She’s taken her three children and is determined to study art in Europe. From the moment I met Fanny I could relate to her desire to escape.

Sadly, her journey didn’t yield happy results. In her first year abroad, her youngest child dies of consumption and she ends up going to Grez to recover. While there she meets some writers, including Robert Louis Stevenson. Her mood seems to improve with him around and it’s hard not to root for hm after she’s suffered so much.

Once they are married, several years later, you can start to see what is going to befall this couple. Stevenson was a rather sickly fellow and he fell ill several times throughout the book. For much of the book, Fanny puts her own creative pursuits aside to cater to his health and genius. Her friends regard her ability to keep Louis, as he prefers to be called, alive as her greatest achievement.

Horan has referenced several bios, personal letters, and published diaries to flesh out the lives of Fanny and Louis. They result is a beautifully written novel that tells an inspiring love story. Although at times I found sections of the book heavy with details of things like prepping for a sea voyage, those details added to the overall appeal and effect of the novel.

There were many times that I had to remind myself that I was reading a contemporary novel, not a classic published int he 19th century. Horan has the voice and words of the time down and it enriches the novel with each page.

Is there a particular time period you love to read about? Give me a recommendation in the comments below!

Lauren Busser is a fiction writer and essayist. She is an associate editor at Tell-Tale TV, where she writes about all things tv. She has had fiction appear in five : 2 : one magazine’s #thesideshow and her nonfiction has appeared in Bitch Media and The Hartford Courant. You can find her talking about tv, film, and knitting on Twitter @LaurenBusser. View more posts

8 thoughts on “Backlist Book Review: Under the Wide and Starry Sky by Nancy Horan”